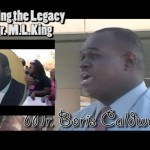 A march was held in honor of the legacy of Dr. Martin L. King, Jr. on Monday, January 18, 2016 in Baytown, Texas. The march was organized by the president of Mission Baytown, Mr. Boris Caldwell. Today’s march was the third annual march in Baytown organized by Mr. Caldwell and his volunteers. The number of marchers increased this year and a great expectancy arose in the hearts of all volunteers concerning next year. The event kicked off at Stephen F. Austin Elementary School on Massey Tompkins in Baytown and ended at its three miles destination — Joe V’s parking lot at the corner of Rollingbrook Drive and Garth Road in Baytown.